In the video below, George W. Bush demonstrates his utter contempt for humanity. After shaking hands with a victim of the Haitian earthquake, the former two-term president (thanks to rigged voting machines) and notable war criminal wiped his hand on Bill Clinton’s sleeve.

It’s far worse than that. George W. Bush, a member of the Nazi-loving Bush crime family, hates and despises humanity. He is a sociopath like so many members of the ruling elite he served while warming a seat in the White House.

As the governor of Texas, it was not enough that Bush presided over a large number of executions. He felt compelled to mock Karla Faye Tucker, a convicted murderer who later led a prison ministry.

In April, 2003, journalist Wayne Madsen wrote: “Bush mocked [Carlson] Tucker’s appeal for clemency. In an interview with Talk magazine, Bush imitated Tucker’s appeal for him to spare her life — pursing his lips, squinting his eyes, and in a squeaky voice saying, ‘Please don’t kill me.’ That went too far for former GOP presidential candidate Gary Bauer, himself an evangelical Christian. ‘I think it is nothing short of unbelievable that the governor of a major state running for president thought it was acceptable to mock a woman he decided to put to death,’ said Bauer.”

“Bush is not an imbecile. He’s not a puppet. I think that Bush is a sociopathic personality,” author Mark Crispin Miller wrote during Bush’s presidency. “I think he’s incapable of empathy. He has an inordinate sense of his own entitlement, and he’s a very skilled manipulator. And in all the snickering about his alleged idiocy, this is what a lot of people miss.”

The callous mockery of Karla Faye Tucker and his childhood penchant for blowing up frogs aside (torturing and killing animals, psychiatrists insist, is a common pathology of serial murderers), George Bush really shined in a completely perverse way when it came to killing Iraqi civilians. He presided over the murder of more than one million of them, making him a Nazi league war criminal.

Bush, of course, didn’t engage in carnage himself. He issued instructions to his underlings and they dispatched brainwashed troops with fresh memories of 9/11 (expertly stage managed by a complaisant corporate media) to do the killing.

But then Charlie Manson didn’t kill anybody either. He had his LSD brainwashed followers do the killing for him. Manson received a death sentence for his role in murder and is now serving a life sentence.

Hitler, Stalin, Mao, and Pol Pot, far as we know, didn’t personally kill any of the millions they had liquidated. Bush is right up there with them.

Bush “is a man who enjoys killing. He is totally in his element when it comes to killing,” writes David Cogswell.

“Feels good!” Bush reportedly said prior to delivering a speech announcing that the killing in Iraq would commence.

Like father, like son. Bush the lesser shares a taste for sadism and murder just like his old man. George Bush Senior was boss at Murder Incorporated, aka the CIA, and numerous reports not only put him at the scene of the assassination of John F. Kennedy but also claim he was intimately involved in the murder.

It is claimed Poppa Bush carried out violations of the Geneva Convention as a fighter pilot during the war. He was alleged to have killed Japanese men in a trawler lifeboat. In 1993, Reuters reported on this incident. Bush had expressed interest in visiting the site in Palau, a tiny Pacific island 900 miles east of the Philippines, if a wreck was found. Serial murders often get off on visiting the sites where they committed their crimes.

Killing Japanese men in a trawler with a 500 pound torpedo is one thing, while invading a country and killing thousands is quite another.

Bush the Lesser was not to be outdone by his daddy. After Bill Clinton — considered an adopted son by the Bush crime family — starved to death 500,000 Iraqi children (Clinton is also a big time psychopath in his own right), Bush Minor, in order to one-up his father, engaged in the indiscriminate use of weapons such as cluster munitions, incendiary bombs, depleted uranium, and chemical weapons against Iraq. He oversaw the murder of more than a million people, a crime right up there with those committed by Hitler, Stalin, and Mao. He engaged in torture, kidnapping, and illegal “renditions” around the world.

“If anyone deserves a Nuremberg trial it is George Bush,” writes Laurence M. Vance.

It will never happen. Instead, Obama — who may ultimately reach and surpass Bush as War Criminal in Chief — established the Clinton Bush Haiti Fund and sent the criminal duo to the devastated island as representatives of (sic) good will.

“Presidents Clinton and Bush will meet with Haitians, the government of Haiti and others providing assistance to earthquake survivors, with the goal of further establishing long-term recovery and rebuilding efforts,” the Clinton Foundation announced last week.

The goal of Clinton, Bush the Elder and Lesser, Obama, and a number of previous presidents was and is not to work toward “long-term recovery and rebuilding efforts,” but to work toward the destruction of nations and the enslavement of billions of people, all of it in the name of a small cartel of monopoly men and banksters who share a contempt for the little people.

George Bush can’t help himself. Even with BBC cameras rolling, he demonstrated his contempt for the suffering people of Haiti. For Bush, they are something less than ants or cockroaches. That is why he wiped his hand off on his adopted brother’s shirt sleeve.

Government Warned 9/11 Commission ‘Not To Cross The Line’ 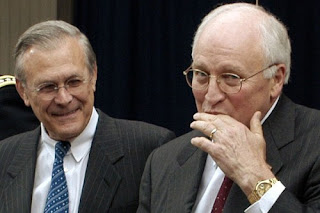 Documents recently obtained by the ACLU show that the government warned the 9/11 Commission against getting to the bottom of the September 11 terror attacks in a letter signed by Attorney General John Ashcroft, Defense Secretary Donald H. Rumsfeld and CIA Director George J. Tenet.

In a letter dated January 6, 2004, the Commission was refused permission to question terrorist detainees, with inquiry leaders Hamilton and Kean being told there was “A line that the Commission should not cross,” in the course of its investigation.

The government urged the Commission, “Not to further pursue the proposed request to participate in the questioning of detainees,” according to the letter, citing the need to “Safeguard the national security, including protection of Americans from future terrorist attacks.”

The warning was just one example of how the Bush administration fiercely struggled to prevent the 9/11 Commission from conducting a deeper probe into the attacks. Bush and Cheney refused to appear before the Commission separately and both refused to testify under oath, instead meeting with panel members informally and in private, with no recordings of the meeting allowed.

“It appears that David Addington took the lead on refusing the 9/11 Commission’s request,” writes the FireDogLake blog. “It appears Addington got the draft of the letter from 9/11 Commission–which was addressed to Rummy and George Tenet. Tenet and Addington clearly had a conversation about how to respond. But it seems that Addington drafted the response, got Condi, Andy Card, and Alberto Gonzales to review it, and then sent it to Tenet (and, presumably, Rummy) to okay and sign the letter.”

As FireDogLake rightly points out, this was part of an attempt to cover-up the systematic torture of detainees which did not fully come to light until the Abu Ghraib scandal was exposed in April 2004.

However, the refusal to allow access to detainees was also undoubtedly so that the Commission members couldn’t later blow the whistle on the fact that the men were nothing more than patsies and goat herders who had nothing whatsoever to do with the 9/11 attacks.

As we have constantly emphasized in the face of establishment media spin that has demonized the mere act of questioning the official 9/11 story, the majority of the 9/11 Commission members themselves have all gone on record to publicly slam the official story as untrue.

The senior counsel to the 9/11 Commission – John Farmer – said that the government agreed not to tell the truth about 9/11, echoing the assertions of fellow 9/11 Commission members who concluded that the Pentagon was engaged in deliberate deception about their response to the attack.

Senator Max Cleland, who resigned from the 9/11 Commission after calling it a “national scandal”, stated in a 2003 PBS interview,

“I’m saying that’s deliberate. I am saying that the delay in relating this information to the American public out of a hearing… series of hearings, that several members of Congress knew eight or ten months ago, including Bob Graham and others, that was deliberately slow walked… the 9/11 Commission was deliberately slow walked, because the Administration’s policy was, and its priority was, we’re gonna take Saddam Hussein out.”

“One of these days we will have to get the full story because the 9-11 issue is so important to America. But this White House wants to cover it up”.

In 2006 the Washington Post reported that several members of the 9/11 Commission suspected deception on part of the Pentagon. As reported,

“Some staff members and commissioners of the Sept. 11 panel concluded that the Pentagon’s initial story of how it reacted to the 2001 terrorist attacks may have been part of a deliberate effort to mislead the commission and the public rather than a reflection of the fog of events on that day, according to sources involved in the debate.”

9/11 Commissioner Bob Kerry also has unanswered questions. As reported by Salon, he believes that there are legitimate reasons to believe an alternative version to the official story.

“There are ample reasons to suspect that there may be some alternative to what we outlined in our version,” Kerry said. The commission had limited time and limited resources to pursue its investigation, and its access to key documents and witnesses was fettered by the administration.

Commissioner Tim Roemer, speaking to CNN, stated that Commission members were considering a criminal probe of false statements. As quoted,

“We were extremely frustrated with the false statements we were getting,” Roemer told CNN. “We were not sure of the intent, whether it was to deceive the commission or merely part of the fumbling bureaucracy.”

Despite the fact that the majority of 9/11 Commission members have openly attacked the official story, the corporate media still frames any suspicion surrounding 9/11 as baseless conspiracy fodder at best, and at worst – terrorist and extremist propaganda.

Top Lists
Posted by RobertsCourt.com at 2:23 PM No comments: